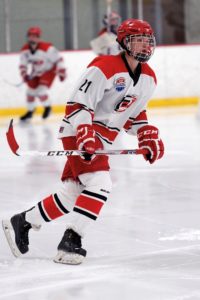 This month’s featured athlete is Hannah Williams! Hannah is a college student from Wilson, NC, who played Ice Hockey in the State Games in 2018 and 2020. The right winger began playing at age 11, and her team eventually made it to Nationals in back-to-back seasons. “Hockey taught me the importance of different roles on a team,” Hannah explains. “I wasn’t the superstar, but I worked my heart out.” She’ll never forget the opportunity that the State Games gave her to get on the ice again with her team. She’s now pursuing her degree in Sports Management with the hopes of working as a Sport Statistician. 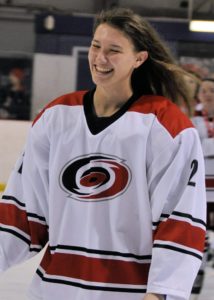 Q: What was the best experience from State Games?

Hannah: The experience was so worth it! Hockey was my life, and I played with some teammates for four years so not seeing them every weekend was really hard. Just being able to get on the ice to play with them again was the best because I didn’t know if I’d ever get to again.

Q: When did you start playing hockey?

Hannah: I started skating when I was 10 and playing when I was 11. I played with boys’ teams for three years and then made the switch to a girls’ teams.

Q: What’s your greatest memory from your hockey career?

Hannah: Making it to Nationals in back-to-back seasons. And it was more about how close it brought us together to get there. No one expected a Southern hockey team to make it!

Q: What was your pre-game superstition?

Hannah: Most hockey players wear a white long-sleeve shirt underneath but mine always had to be blue or purple.

Hannah: I learned the importance of different roles on the team. I wasn’t the superstar, but I worked my heart out.