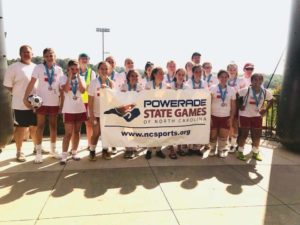 Our next profile is on a U18 Girls Soccer team who will be traveling to compete at the State Games of America in Lynchburg, VA August 3rd-4th. Bob Clausen is the head coach of the team and manages logistics, travel, and the rest of the behind the scenes. He enjoys that the Powerade State Games and the State Games of America both provide an opportunity for his unique team to play competitively. He typically coaches a U16 recreational team during the regular season, but the State Games allow him to construct a different team roster. He pulls together players that he doesn’t get to normally see and that don’t typically play together. The roster is comprised of players from his U16 recreational team as well as former recreational players who have either relocated or advanced to a higher division. In addition, some players are added from his assistant coaches’ teams. A couple of players they have met through the years in competitions, and for this year they have recruited a former opposing player.

The Raleigh Red Devils earned the Silver medal in the U16 Girls division of the 2018 Powerade State Games. This team is now preparing to travel to Lynchburg to play in the U18 Girls tournament under the name WCNC. Under State Games of America rules, at least ten of the players on the roster must be those who qualified for the spot in June 2018. In addition to these ten, they are using seven add-on players from various backgrounds. Only four of these players are on Bob’s traditional recreational roster. The team that Bob and his staff took to Charlotte this June was comprised of players from nine different teams including: Lake Jordan, Legion, and various challenge teams. Some of these girls are on this roster while others were unavailable for the weekend. 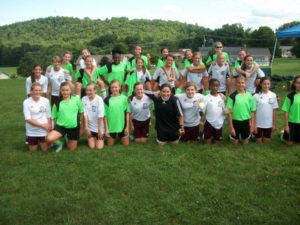 The team at State Games of America in Hershey, PA in 2013

A portion of this same team competed six years ago at the State Games of America in Hershey, Pennsylvania. According to Bob, the team had a great time in Pennsylvania and the event was very well run. In addition to some competitive soccer, the team was also able to enjoy Hershey Park which was located nearby. The 2013 State Games of America was also where they first met an opposing player from Mississippi when they played against her team. She seemed to gel with some of the girls in the post-game and made sure to keep in touch over the years. She will be traveling all the way from Mississippi specifically to play as part of this team in the State Games of America!

At the Powerade State Games in 2018, they played the Greensboro team (GCYS 2003) twice. While they may have suffered two close defeats (2-0, 2-1) they played close and learned from the losses. While it was a different group then will be at Lynchburg, these teams just met at Charlotte in June and GCYS 2003 came away victorious 2-0. It should make for an interesting tournament this weekend, as these teams are currently slated to meet in each team’s second game of the day on Saturday at 2pm. A lot will likely be on the line in the standings this go round and it helps to have common knowledge of your opponent.

WCNC will be playing in the U18 Girls Division in Lynchburg, VA against teams from Mississippi, Greensboro, & Virginia. They will open the tournament against the SRSC Diamonds, a U15 team from the Mississippi Gulf Coast, at 9:30am on Saturday. The third game of pool play for WCNC will be against TriCities United, a Northern Virginia based team, at 11am on Sunday. They previously played against TriCities United in 2018 at a tournament held in Richmond, VA and Bob actually helped convince their coach to sign up and bring the team to compete in the State Games of America this summer.

The Bronze Medal game will be played at 2pm followed by the Gold Medal game at 4pm on Sunday, August 4th. More info on the soccer tournament can be found at the link http://stategamesofamerica.com/socceroutdoor2019.

Bob has been involved in coaching for 21 years. He served as his daughters head coach until the team aged out of U18 and since then has worked with three different recreational teams. His position is that of the team manager who handles all the behind the scenes planning. Logistics for this team specifically are quite complex as you have to coordinate who is available for summer soccer tournaments with family travel, other clubs and sports, jobs, etc. Thankfully, Bob has two dependable assistants, Paul & Tony. These gentlemen run the practices and drills and handle the strategical side of things.

When Paul’s team (the Raleigh Red Devils) played in Winston-Salem at the Powerade State Games in 2018, they merged a few of Bob’s players on there and coached together. Paul’s daughter is now 18 and yet he has continued to help coach this team even since his daughter moved on to challenge years ago. He loves coaching and currently coaches three different teams during the normal fall & spring seasons! Bob & Tony both started out coaching their own daughters teams (both in their 30’s now) and have stuck with it ever since. As coaches, they have all witnessed players move on to play at higher levels. Some of the players, they have been able to coach since they were seven or eight and now they are close to or completing high school.

I went out to catch a practice at East Gate Park in North Raleigh as the team gears up for the State Games of America. In my conversations with Bob, I was able to gather that in the lead up to this past June’s Powerade State Games in Charlotte, the team practiced collectively five times. In the lead up to State Games of America, the team has had four practice sessions. Since it is the middle of the summer and not the traditional soccer season, every practice has featured a different array of faces. Players have to be on top of their conditioning on their own and be ready to play.

I was able to interview four of the team members and get their thoughts on their team dynamics and the upcoming weekend tournament.

Nicole, started playing soccer at the age of five. Her favorite thing about this team is that “people aren’t stuck up and cocky about themselves. On a lot of challenge teams there are a lot of players who are not nice to you because think they are so much better than you and stuff but on this team everyone…a lot of people are different levels but no one singles other people out for it.”

I asked Nicole, What are you looking forward to in Lynchburg and what are your expectations?

“I’m excited as I have tryouts two days before it and then get to follow it up with a tournament which will be really fun because I love soccer. A lot of soccer this summer and I’m happy about it. I’ve never really played over the summer before aside from training. Trying out for Wake Tech.”

Emily, a striker who started playing soccer around five. According to Emily, the coolest thing about this team is the “friendships that are made on this team and it’s like a family. Everyone just comes together to play to play the game we all love.” She is definitely “looking forward to competition and hopefully we win. Expecting to play good teams and to better ourselves”. 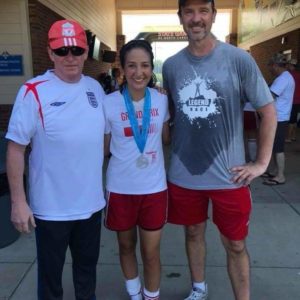 Emily started on this team when seven and now this will be her last game with them. She has kept coming back for tournaments. Here is what Tony had to add in regards to Emily as a player. “She had 24 goals her first year…she has scored a lot of our goals. We just had her for a couple of seasons, as a member of the rec team, then she got passed off to higher levels. She just graduated from high school. A nice fitting end where she will play her last game with us. She has played in a few State Games with our team.”

Flynn also started playing soccer when five, as her dad & brother also played. She is the goalkeeper for the team. She is “hoping for first place, but we’re going against good teams who are a lot more experienced and have more chemistry together.” Her favorite thing about this team is that “the defense is really really strong and the girls are really nice.”

My last interview was with McKayla who plays forward and wing. Her favorite thing about the team is that they are “really friendly. Not stuck up like any other teams are. They are fun to play with.” When I asked what she was most looking forward to, she quickly exclaimed, “GOALS! The potential to win.”

I asked Bob for his final thoughts and what he thinks sets this team apart. Bob stated, “The best thing we do as a team for this team is we don’t have that win at all costs attitude. We know, we understand that we aren’t going into this thing as an established team. We have a little disadvantage versus some of our competition, they get that. Put, they all put 110% out there every minute that they are playing.”

We wish WCNC as well as all of our other North Carolina participants representing & competing in the State Games of America success! Bring home the Gold!