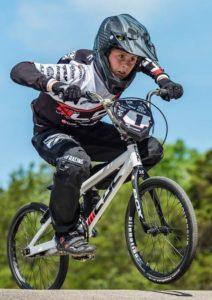 Sebastian Bettinger, AKA ‘Kid Rocket’, has been competing in BMX racing for over half of his life. Sebastian competes in the 12 year old expert class and has experienced a great deal of success in the sport, traveling across the country with his family in order to be a part of high-level caliber competitions. He began riding competitively at the age of six, and has shared an affinity for the sport ever since. “BMX is very challenging and extremely competitive but I love this sport and cannot imagine my life without it.”

In addition to his first place finishes at multiple USA Championships, Sebastian touts a lengthy list of other victories. He has won internationally in Canada, multiple state championships, various gold cup races, and last but certainly not least, at the Powerade State Games of North Carolina. “Last year, the games were held in beautiful Tanglewood Park and what made my win even cooler was that I got to share the podium with my mom who also raced and won in the ladies category.” 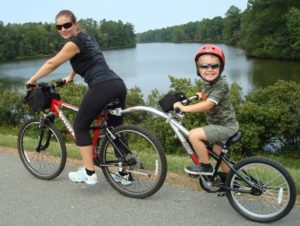 Sebastian’s story as to how he became involved with BMX racing is unique. Sebastian’s mother, Kat, grew up in Poland where cycling is a common form of transportation in addition to a leisure activity. She has fond memories of riding an orange tandem bike with her mom to kindergarten and wanted to ensure her son was able to experience the same kind of joy that she did as a child. Kat found and purchased a bike attachment on amazon, which allowed her son to sit and pedal as if on a real bike, while she was able to steer and maintain control.

BMX was introduced to their lives as a result of a fateful conversation at Umstead State Park. Kat was talking with another bicycle enthusiast, who informed her that his daughter was racing BMX. “He highly recommended the sport and encouraged me to take my son. We had never heard of BMX Racing and had no idea there was even a track within 15 mins of our house. Sebastian was 6 when we went to the track in Raleigh for the very first time and they had a bike plus all the gear he needed to ride available to rent. After practice, he wanted to stay and race. Following the race, he got his very first race trophy. That was the hook, TROPHIES!”

When asked to select his greatest accomplishment thus far in the sport, Sebastian answered “My all-time

favorite win and the one I’m the most proud of is from the 2014 USABMX Grand Championship. Called ‘grands’ for short, it is considered the greatest race on Earth and takes place in Tulsa, Oklahoma every Thanksgiving. I was 8 years old when I won and the first place trophy was almost twice as big as me! It is 6 feet and by far the tallest trophy in my collection.”

Sebastian has also made Team USA and competed while representing USA Cycling in the BMX Racing World Championship in Rock Hill, SC in 2017. This year’s World Championship event will be held in Belgium, and Sebastian is traveling to Florida this upcoming weekend (Feb. 22-24) to compete with the hopes of qualifying for Team USA! 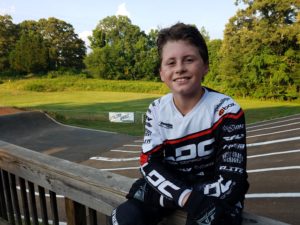 Kid Rocket has quite an active social media presence, and you can keep up with him on YouTube (Kid Rocket Vlogs), Instagram (@kidrocketbmx), Facebook (@KidRocketBMX), & Twitter (@bmxkidrocket). His success as a competitor has landed Sebastian with a sponsorship by Little Dude Components, a high end BMX manufacturer based in Arizona.

We are looking forward to seeing Sebastian compete this year at the 2019 Powerade State Games BMX Competition which will take place June 22 at Hornet’s Nest Park.