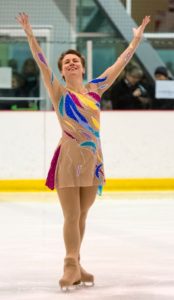 Angela Maher first gave the sport of Figure Skating a try while she was enrolled in graduate school. “Growing up, I was always passionate about figure skating but the closest ice skating rink was nearly two hours away! So while I didn’t get the chance to skate as a child, I always loved skating and started taking lessons as an adult as soon as possible.” While her passion for the sport runs deep, she took about a ten year break from the ice to start a family with her husband that she met through Figure Skating. The two met in 2002 and now sometimes compete together in pairs. In fact, Angela and her husband Joel took home the gold medal in pairs at the 2017 Powerade State Games.

Angela herself has now been competing for around ten years in total. “As an adult athlete, I stand out a lot in figure skating! Many consider figure skating to be a child’s sport, but there a lot of adults that skate and compete too while juggling work and parenthood. Like being a competitive athlete in any sport, being an adult skater requires incredible discipline and resilience in addition to a sense of humor and not taking yourself too seriously when your performance falls short of your goal. I’m still working hard to push myself each day and improve my skating while taking care of my body and health.”

In addition to the feeling of gliding on the ice and pushing herself to a better performance, Angela enjoys interacting with the children while at the rink. “Many children at our rink look up to me and the other adult skaters. I’m working on getting new, more difficult jumps side by side with the kids. I always tell them that if I can do it, they can also! Several weeks ago, a girl was working hard to land a new jump. She was so close, but was having difficulty summoning the courage to go for it. She and I are working on learning the same jump, and when she finally landed it, it was such a great day! The kids and adults at our rink cheer each other on and encourage each other every day as we strive to achieve our goals, which is very motivating for everyone.” 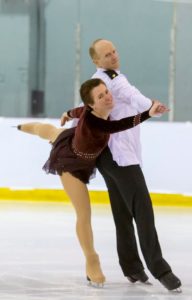 Angela, Joel, and their son enjoying a hike

We asked Angela about her greatest achievement thus far. “My proudest accomplishment is being able to be a role model to my son by setting ambitious goals and working hard to achieve them, as well as maintaining my fitness and health.” She is also pretty proud of the gold medal she won at the US Adult National Figure Skating Championship. “I’m looking forward to skating for a lifetime, and can’t think of a place I’d rather be!”

When asked what she finds most challenging about the sport, Angela replied that “Figure skating is a very detailed sport that requires equal parts artistry and athleticism. Every accomplishment leads to a brand new set of details to work on and refine, which is rewarding and challenging at the same time. The more I learn, there are endless ways to still improve!”

Angela practices at the Polar Ice House in Cary. She is looking forward to competing in the Adult Silver Freestyle event at this year’s Powerade State Games Figure Skating Competition taking place on March 30th at Extreme Ice Center in Indian Trail, NC.